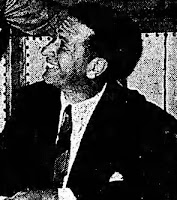 Raskin was the captain of both the baseball and basketball teams at CCNY, he briefly played professional basketball before coaching high school football at Stuyvesant High School in New York. He would serve in the U.S. Navy during World War 2 snd come back to coach basketball, most notably three different stints at Brooklyn College and as the coach of the Israeli Olympic Team in the 1952 Summer Olympics.

He was married to Florence.


Stats:
http://probasketballencyclopedia.com/player/Tubby-Raskin/
Posted by Peach Basket Society at 10:44 AM