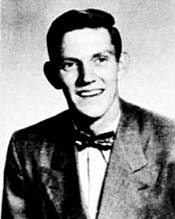 Born to Lawrence and Lillian King, Dan King was baseball and basketball star at Grove HS in Paris, Tennessee. He was offered contracts by the St. Louis Cardinals and Detroit Tigers but chose to go to college instead. King would star on the basketball team at Western Kentucky as well as pitch for the baseball team. He played for the Baltimore Bullets before the team disbanded shortly into the 1954-55 season. He continued to play baseball around Kentucky for a few years before concentrating on teaching and coaching for Edmondson High School. He later coached at Bishop David HS (now known as Holy Cross) and Pleasure Ridge HS. King was also a noted softball player, elected to the ASA Hall of Fame in 1987.

Dan married Norma Jean Ashlock in 1956 and they had one son.

Posted by Peach Basket Society at 4:39 AM No comments: 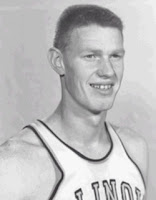 Born to Matthew and Florence Kerr on the South Side of Chicago, Kerr was a gifted soccer player at Tilden High School until a late growth spurt put him at 6'9 and allowed him to gravitate to basketball. He received a scholarship at Illinois and helped the team to the Big Ten title and Final Four appearance in 1952. He graduated from Illinois with 1299 career points and was drafted by the Syracuse Nationals in the 1954 NBA Draft. 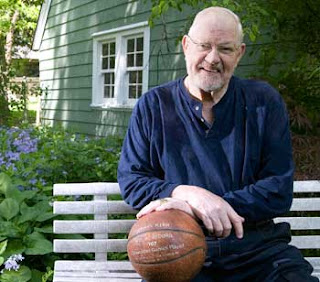 As a rookie, Kerr helped the Nationals to the NBA title in 1955. A three-time All-Star, Kerr would play 12 seasons in the NBA and had set the record 844 complete games played. After the 1965-66 season with the Baltimore Bullets, Kerr was selected by the Chicago Bulls in the expansion draft, but became their head coach instead of a player. His playing days behind him, he finished with over 12,000 points and 10,000 rebounds. Kerr would coach the Chicago Bulls for two seasons and then the Phoenix Suns for two. He was lured to the Virginia Squires of the ABA where he served as the team's GM, signing players like Julius Irving. He returned to the Bulls in 1973 as the team's business manager and later worked as a broadcaster.

Kerr married Betsy Nemecek in 1954 and they had five sons and one daughter. One son, John Jr., died at the age of 3. He also took in the three daughters of his sister-in-law, Drusella, when she and her husband Evan died within months of each other in late 1971 and early 1972. Drusella and Evan's daughter Laurel Jean Ellis would be murdered in 1974 while attending Grand Valley College in Michigan. Her murder would go unsolved for many years until DNA tests linked a man named Lamont Marshall who had been found to have commit other murders and violent acts in the area.

Posted by Peach Basket Society at 6:27 AM No comments:

Out of Trenton, New Jersey, Mike Kearns would play basketball at Princeton, graduating in 1951. He was selected by the Philadelphia Warriors in the fifth round of the 1951 draft, but more importantly, he was selected by the U.S. Army and served during the Korean War. After the war, he joined the Warriors in February of 1955. He would play in only six games, scoring only a single point.

Mike married Beverly Bronson in 1964 and they had two sons and a daughter.

Posted by Peach Basket Society at 4:36 AM No comments: 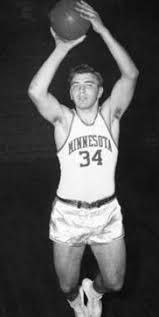 A football and basketball star at Anaconda HS in Montana, Ed Kalafat was drafted in the first round of the 1954 NBA draft by the Lakers, where he would play for three seasons. He was working at First National Bank in Minneapolis in the off-season, and after the 1956-57 season, he left basketball behind to continue in banking.

Kalafat married Judy Daggett iu 1954 and they had three daughters.

Posted by Peach Basket Society at 4:22 AM No comments:

Born to Raymond and Katheryn Hedderick, Herm grew up in Erie, Pennsylvania,
Hedderick played both baseball and basketball while at Canisius. He was drafted by the Celtics in the 1952 NBA Draft and was also signed by the Cincinnati Reds that year, pitching for their Class B team in Salisbury. After serving in the military in the Korean War, he was traded to the Knicks in the 1954-55 season and appeared in five games. He would play one more season of minor league baseball with the Reds farm system in 1955, too.

He and his wife, Sally, had a son and a daughter. 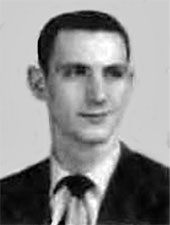 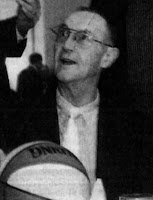 Drafted by the Baltimore Bullets in the 1952 NBA Draft, Grigsby would instead serve in the army for a couple years. After his discharge, in September of 1954, he was traded with Ray Felix to the Knicks for Al McGuire and Connie Simmons. He would only play in seven games for the Knicks, scoring 16 points before being released. He would return to the high school he graduated from as a basketball coach. leaders Stivers HS for four seasons before accepting an assistant coach job back at the University of Dayton. After five seasons as assistant, he left Dayton but would later return as a broadcaster.

Posted by Peach Basket Society at 11:44 AM 2 comments: