Columbus Athletic Supply only managed a single win in the 1937-38 season. They finished 1-12 and in last place in the Eastern Division.

Posted by Peach Basket Society at 5:33 AM No comments:

The franchise would last one more season in the NBL. Meyer "Buck" Gefsky (1900-1976) was the owner of the team, and he was also the league president. Gefsky has a successful Pittsburgh-area banker with Washington Trust Company as well as a former semi-pro player and basketball coach.

Biography
Posted by Peach Basket Society at 4:04 AM No comments:


Due to the fact that teams were left to make their own schedule, Buffalo, formed from the merging of the Bisons from the Midwest Conference and another Buffalo professional team, played only nine league games. This was their only season in the NBL.


Heerdt was a member of the Buffalo Germans, a touring pro basketball team that won 111 consecutive games in 1907-1908. The Germans joined the ABL in 1925 with Heerdt as coach. Heerdt wound up being the coach, owner and GM for the Buffalo Bisons, who joined the Midwest Basketball Conference in 1935. The Bisons then were a charter member of the NBL. He also coached at Niagara and the University of Buffalo

Posted by Peach Basket Society at 5:19 AM No comments:

This was their only season in the NBL.existence.

Biography
Posted by Peach Basket Society at 5:17 AM No comments:


Whiting Ciesar All-Americans (located in Indiana) went 12-3 and finished second in the Western Division. They lost to Oshkosh in the semi-finals. The team was known as Hammond after this season. 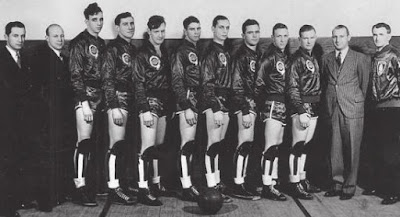 Wickhorst started as a player for the Chicago Bruins for a time, and was a player/coach for the Whiting Macks prior to taking the helm for the All-Americans. He stayed on as coach for three seasons there.


Note: Arndt, Cullen and Young only played with the club during the playoffs. 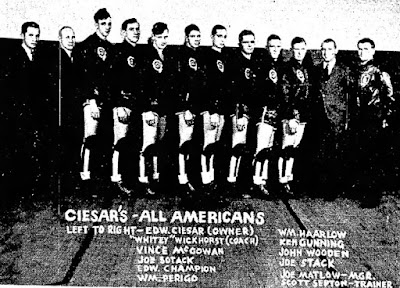 Managed by Alonzo "Lonnie" Darling (c.1902 - April 19, 1951), Oshkosh had been a successful barnstorming professional team prior to the formation of the NBL. They won their division in the inaugural season, but fell to Akron in championship.

Hotchkiss was a guard at Wisconsin and played for Oshkosh before becoming their coach in 1936. Oshkosh joined the NBL and Hotchkiss was renewed as coach in October of 1937, for the inaugural season of the NBL. He coached Oshkosh for their first four seasons in the NBL. 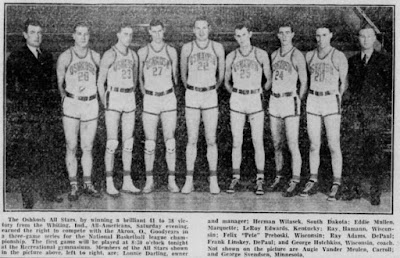 Posted by Peach Basket Society at 12:07 PM No comments:


The Akron Goodyear Wingfoots were formed in 1918 by employees at Goodyear. As a corporate/recreational team, they also served to promote their shoe, the Wingfoot, one of the first rubber-soled shoes. Along with Akron Firestone and other AAU teams, they joined to form the NBL in 1937. They went 13-5 and finished in second place in the East Division, one game behind Akron Goodyear. They went on to defeat Firestone in the playoffs, and then defeated Oshkosh to win the first NBL title.

Biography
Posted by Peach Basket Society at 12:12 PM No comments:


One of the earlier industrial teams of the era, the Akron Firestone Non-Skids were formed in the early 1930's and played in an earlier incarnation of the NBL, and then the Midwest Basketball Conference, before joining the true NBL in the inaugural 1937-38 season. The Non-Skids won the East division with a 14-4 record but lost in the opening round of the playoffs to their Akron counterparts, the Goodyear Wingfoots.


Known as "Pepper," Sheeks was an Akron-area athlete, playing for Akron in the NFL in 1922 and '23. He played college football and basketball at the University of South Dakota.

Posted by Peach Basket Society at 4:44 AM No comments:

I was doing some research on the early days of professional basketball, and found that the information available is pretty sketchy. I was able to find and identify players who were previously unknown, and figured I would throw up this blog to track my trials and errors, as well as allow other out there to help in research or maybe even throw a hint here or there or fill in some holes.

I am mainly looking at the National Basketball League (which commenced operations in 1937-38), the Basketball Association of America (which started in 1946-47 and became the NBA when it picked up teams from the NBL for the 1949-50 season), the NBA and ABA. Maybe later I will venture off to other early professional leagues, but for now, I am sticking to the NBA pipeline. Think of this as a very low-end version of SABR for basketball.

The NBL was formed from the remnants of the Midwest Basketball Conference, which was a loose assortment of Industrial teams. A lot of corporations had semi-pro teams for baseball and basketball, and competed with others in their region. Think of the Springfield Nuclear Power Plant softball team, if that helps the anology. There were a few attempts at organizing an honest-to-goodness professional league at various points in the sports history. There was an NBL the operated in 1926-27, again in 1929-30, and even one more time in 1932-33. The Midwest Basketball conference was formed in 1935-36, and after two seasons, some of the teams left to form the National Basketball League. Comprised of teams owned by three Midwest based corporations (General Electric, Goodyear and Firestone), they were the largest and most successful (relative term) pro hoops league until 1946. In late 1946, NHL team owners were looking at ways to get their arenas used on nights when there were no hockey games. Their decision: basketball. So five of the six NHL team owners (Detroit, Chicago, New York, Boston and Toronto) created basketball teams, and added six other cities (Washington, Providence, St Louis, Cleveland, Philadelphia and Pittsburgh) to form the BAA. By the end 1948-49 season, the NBL was on the verge of disintegrating due to the much-more successful BAA. So for the 1949-50 season, the leagues merged. (A more accurate description would be that the NBL folded and the BAA picked up the more successful franchises.) They changed their name to the National Basketball Association and the rest is history.

I am using various sources to start with, like basketball-reference.com and justsportsstats.com. They are good with a lot of starting information, but some errors are to be found as well as blank spots not filled in. Those pre-1950 players can be pretty tricky to locate, but not impossible. A lot of early teams were local, so most Fort Wayne players, for instance, lived or went to college near Fort Wayne.

So as I said, I will explain my research and logic, and if anyone can confirm or refute anything I wrote, please feel free to add information. This is a community effort. Include links or sources, though, for information, if available.


Posted by Peach Basket Society at 6:24 AM 3 comments: