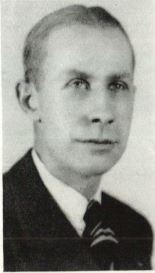 Born to George and Ada Ely in West Unity, Ohio, Gil grew up in nearby Pioneer, Ohio, and enlisted the army on October of 1918, but World War 1 ended a month later and Ely was discharged in December. He attended the University of Michigan after afterwards played basketball professionally for many years. He splayed with the Pulaski Post team in Detroit for many years, including with the team when they entered the ABL. He left the team before the end of the season, and joined Cleveland just in time for the playoffs.

Posted by Peach Basket Society at 9:58 AM