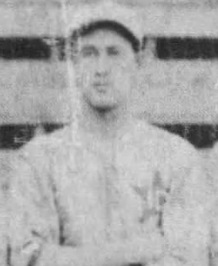 Jones was a long-time minor league baseball player, putting in 17 seasons in the sport but never making the major leagues. The outfielder / first baseman showed some great power while playing in the Sally and Pidemont Leagues in the 1920's and 30's.

Jones died in 1961 from injuries suffered after falling from a ladder while working at home. He was 70 years old.

Posted by Peach Basket Society at 8:06 AM