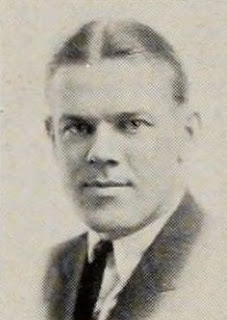 The Rockford native was a football and basketball star at Illinois until January of 1922, when it was discovered he played a semi-pro football game and was declared ineligible for college athletics. He quickly joined the Harvard Marvels professional basketball team, and later played for the Chicago Bruins, serving double duty as player and coach for the team in 1925-26.

Walquist played nine seasons as a halfback in the NFL with the Chicago Bears. He would go on to become the backfield coach at the University of Oregon.

Laurie was 87 when he died from complications of Alzheimer's disease in 1985.

Walquist was married to Margaret and they had two daughters and one son.


Stats:
http://probasketballencyclopedia.com/player/Laurie-Walquist/
Posted by Peach Basket Society at 6:11 AM