A graduate of Benedict High School, Wayne earned a bachelor’s degree from York College in 1947. He joined the Navy V-7 program in January 1942 and received his commission in April 1944. His duty took him to the Pacific theater, where he served until the war ended. He was discharged in July 1946. He earned a master’s degree from the University of Nebraska-Lincoln in secondary school administration in 1953.

On Jan. 25, 1947 he married Ellen Marie Meyer in York. He was devoted to her throughout years of ill health. She passed away in January 1996. The couple had one daughter, Barbara.

Wayne spent his career in Beatrice, Nebr., where he positively impacted the lives of thousands of young people as a coach, teacher, principal and sports official for 37 years. He came to Beatrice in 1948 after teaching math for one year in North Platte. He taught social studies, physical education, and math and monitored study hall at Beatrice High School for four years.

He then moved to Beatrice Junior High School in 1952 where he taught algebra for 14 years. In 1966 he became the principal of the junior high school, a position he held for 19 years. In 2013 he was inducted into the Beatrice Educational Foundation Hall of Fame as a Friend of Education.

Wayne believed strongly in the power of participation in athletics to build character, motivate students to succeed academically, and teach life lessons in teamwork, self-discipline and persistence. He lived this belief through his many contributions to athletics in the Beatrice schools, the community and the state.

During his tenure at Beatrice High School, he coached varsity basketball. As a junior high school teacher, he started football and basketball programs for seventh- and eighth-graders and coached both sports. He also coached track for grades 7, 8 and 9. To give more students an opportunity to experience the benefits of athletic competition, he started a popular noon-hour volleyball program. For several summers, he managed the Youth Recreation baseball program in Beatrice, also serving as umpire and groundskeeper.

Wayne contributed to athletics on a larger stage as a basketball and football official in eastern Nebraska from 1952 to 1965. He refereed the boys state basketball tournament for six years and officiated the Shrine Bowl football game in 1963.

During the 1930s, ‘40s and into the ‘50s, Wayne was well-known throughout the state for his baseball and basketball prowess. A basketball stand-out at York College along with his brother Jim, he was twice named player of the year and was a conference all-star all four years he was in college. He helped the school to a berth in the National Association of Intercollegiate Athletics tournament, where the team defeated the University of Akron in the first round and lost to the University of North Texas University by one point in the second round. After graduating from York College, he briefly played professional basketball with the Omaha Tomahawks.

As a semi-professional baseball player, he played center field on several town teams, often with some of his six brothers, all accomplished baseball players. He retired from semi-pro baseball in 1955. In 2012, Wayne was inducted into the Nebraska Baseball Hall of Fame.

Wayne was an avid golfer, serving a term as president of the Beatrice Country Club, and a loyal Husker fan. He also enjoyed watching major league baseball, especially the St. Louis Cardinals. “I think it’s a great game – it’s one of the best games there is,” he said of baseball in an interview with the Hastings Tribune in 2012. “A lot of people don’t understand what’s going on. There’s something going on all the time in the minds of the players. It’s really a big part of the game, along with the ability of the individuals.”

Posted by Peach Basket Society at 1:50 PM No comments: 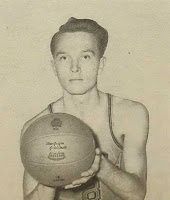 Dr. James Eldon Hultberg, D.D.S. passed away on Tuesday, July 7, 2020 at 4:30am at East Jefferson General Hospital at the age of 93 years. He was born October 2, 1926 in Burlington, Iowa to the late Frank Oscar Hultberg and Alice Peterson Hultberg. He was preceded in death by his wife Marion Simmons Hultberg; brother John Hultberg; son-in-law Robert Meadows; and grandson Joshua Meadows. He was the beloved and faithful husband of Marion, the love of his life for 63 years. They were married August 14, 1949 in New Orleans, Louisiana. They traveled extensively and especially enjoyed cruises. They successfully completed five Crescent City Classics and were members of the Let's Dance Club and the Plimsoll Club. He is survived by his daughters, Jan Hultberg Meadows of Elgin, Texas and Joanne Hultberg Gordon and her husband Joseph of Boca Raton, Florida; and his son Jordan Phillip Hultberg of Baton Rouge, Louisiana. He is the grandfather of Erin Meadows of Elgin, Texas; Kelly Gordon Zemil and her husband Nick Zemil of McLean, Virginia; Scott Gordon of Miami, Florida; Jordan Hultberg and his wife Michelle of Baton Rouge, Louisiana; Richard Hultberg and his wife Kelsey of Houston, Texas; Mary Katherine Hultberg of Houston, Texas; and Catherine and Caroline Grace Hultberg of Baton Rouge, Louisiana. He is also survived by daughter-in-law Angela Meadows Paltadakis; and great- grandchildren Olivia Meadows, Emery and Josh Hultberg and Lane, Ben and Charlie Zemil. He leaves behind Juanita Dusse, his loving companion of six years who was with him in the hospital at the time of his passing, as well as many friends who loved him dearly. James graduated from Warren Easton High School and earned a Doctor of Dental Surgery degree from Loyola University in 1948. He served three years in the Navy during WWII and was stationed in San Diego, Whidbey Island, Marshall Islands and Pensacola, attaining the rank of LTJG. He practiced dentistry for 43 years in New Orleans. He was affectionately called "Big Jim" by his family, but known to many in his younger years as Red Hultberg. He was a resident of River Ridge (formerly Little Farms). Big Jim played basketball at Warren Easton and earned a basketball scholarship to Loyola University in New Orleans. He played for the 1945 National Championship team, was inducted into Loyola's Hall of Fame and earned Second-team All American honors. 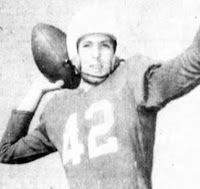 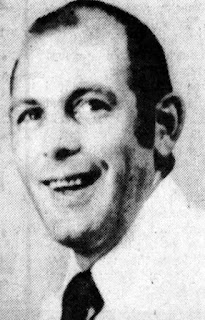 Larry Matthews was a prep star from Horseheads, New York, earning 11 letters at Horseheads HS. The football and basketball star played one game for the ABL's Elmira Colonels in November of 1952. After serving in the USAF, he would work for many years as a teacher, coach and administrator. He eventually accepted a post in Nashville, and died in Tennessee in 2005.


Stats:
Posted by Peach Basket Society at 4:57 AM No comments: 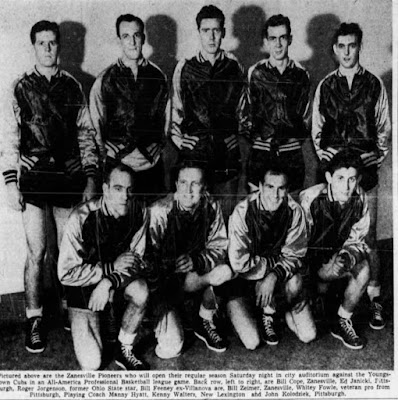 Zanesville managed to claw their way out to a 5-5 start, but then hit the skids, dropping ten of 11 to finish in a distant last place.

PLAYERS:
(I know you might think Starw is probably a typ for Strall, but they both played in the Feb 1, 1948 game)

Posted by Peach Basket Society at 2:18 PM No comments: 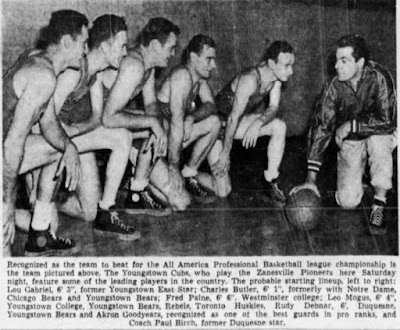 When the NBL's Youngstown Bears disbanded following the 1946-47, the end of professional basketball in the Ohio town was short-lived. The town was granted a franchise in the smaller All-American League, and the team took the Cubs moniker, aware that the scope of play was smaller than the NBL. Paul Birch, whose 1946-47 season was his first withut playing, had been the coach of the BAA's Pittsburgh Ironmen but he team folded prior to the 1947-48 season, and Birch would head to Youngstown where he would be the head coach for the Cubs, as well as an active player.

The Bears, playing with a lot of NBL/BAA castoffs, rolled to a regular season title and advanced through the semi-finals before falling to the red-hot Dayton Metros in the AABL Championship series.

Posted by Peach Basket Society at 2:06 PM No comments:


Wheeling pretty much hovered around the .500 mark all season, making the playoffs but losing to Youngstown in the semi-finals. Jimmy Quinlan was the team's high scorer, averaging 15.5 point in the 14 games I could find stats for.


Posted by Peach Basket Society at 2:03 PM No comments:

The Cumberland Dukes were one of the teams in the AABL that did well at the ticket office, but despite a few talented players, they couldn't get it together to make the playoffs.

Posted by Peach Basket Society at 11:10 AM No comments: