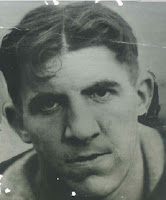 A football and basketball player at the University of Detroit, Voss left school in June of 1918 to serve in the Army during World War One. He would return to the school shortly later when the war ended. Throughout the 1920's, he played a lot of pro basketball all while playing 9 seasons in the NFL. As a playing coach with the Pulaski Post in 1925-26, he was released by the team in February. He caught on with Brooklyn and would go on to play for various teams over a five-season stay in the ABL.

Voss was married to Margaret Hyatt and they had one daughter.