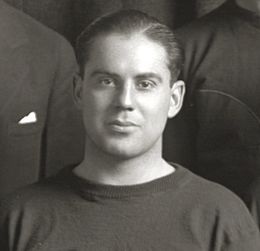 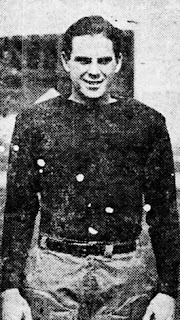 Born to Eugene and Della Gregory in Battle Creek, Michigan, the Grgeory family moved to Ann Arbor prior to Bruce going to high school. Gregory played basketball and football at the University of Michigan, and he played pro basketball with Detroit Pulaski Post in the ABL. Grgeory played one season in the NFL, with the Detroit Panthers in 1926. He later moved to Flint, and then to Akron to work for Goodyear. He moved to Frederick and worked as a tire salesman before buying his own tire shop.

Shortly after Christmas in 1960, Gregory was driving home late one night when he dozed off behind the wheel. His car swerved into a concrete bridge pillar, killing him. He was 57.

Bruce married Ruth Watkins and they had one son and one daughter. His brother, Donald, was an avid pilot an aviation pioneer who died while performing an exhibition for the U.S. military.

Posted by Peach Basket Society at 6:06 AM