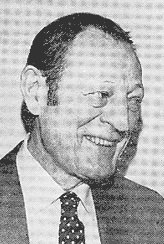 Other sources say this player as Peter Paul Basich, a Columbus and Dayton native who would graduate from Michigan State in 1941. However, I am pretty sure this player is Sam Busich, not Pete Basich. Even though the rules of the collegiate game were different then, Basich would have been 26 when he graduated from MSU, which is ancient in the terms of college athletics.

Busich, on the other hand, played football and basketball at Ohio State in the mid-1930's. He also signed on in November of 1937 to play basketball for a semi-pro team in Cleveland and played for Columbus the NBL for one game as a guard. An Article from the News-Journal of Mansfield Ohio says that former Buckeye Sam Busich was playing for the Columbus All-Americans in 1936-37.

Sam would play three seasons of pro-football in the NFL. He married Mary Carter in 1946.

Posted by Peach Basket Society at 5:34 AM