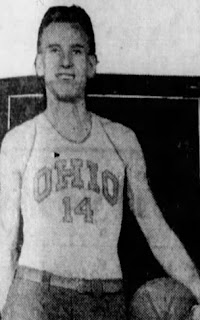 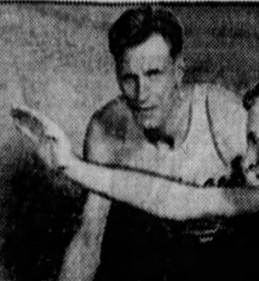 Wilmer Clemons Hosket was born in Dayton to Charles (1860-1923) and Katherine Hosket (1873-1938) and graduated from Stivers High School ('30) where the basketball team won three state championships. Hosket attended Ohio State, where he was a member of the 1933 NCAA champions. He was declared academically ineligibleto play at OSU for the second half of his senior year. He played briefly for Dayton in the Midwest Basketball League, and then in the NBL. After Dayton, he joined the barnstorming team, the Waterloo Wonders, in 1940. He returned to Dayton in 1941 to at Sucher Meat Packing as well as playing on their semi-pro squad. He died in 1956 after a bout with leukemia. His son, Bill, played in the NBA.

He and his wife Ethel had two daughters and a son.

Email ThisBlogThis!Share to TwitterShare to FacebookShare to Pinterest
Labels: 1937-38, Dayton Metropolitans, under 50