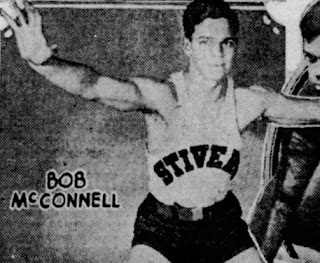 Thanks to some new sources, I was pretty certain that the Columbus player previously just known as "McConnell" is likely Bob McConnell. Bob was a Denison basketball star who was coaching in Granville, Ohio, in 1937. Granville is very close to Columbus, so it seems very likely that he is the partially-identified player. I am almost 100% positive.

A football and basketball player at Stivers HS, he would later in life be heavily involved in midget racing. He retired to Florida, where he died in 1993.


He and his wife, Helen, had one son and one daughter.