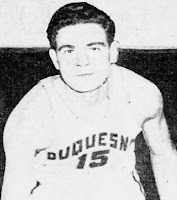 Herbert Sidney Bonn was born in Aliquippa, Pennsylvania to Benjamin (1880-1969) and Goldie (1885-1967) Bonn, and grew up in Squirrel Hill. He went to Taylor Allderice High School. He was an All-American at Duquesne ('37) and played semi-pro basketball a little before joining Pittsburgh in the NBL for two seasons. In January of 1941, he enlisted in the Navy Reserves and became a pilot. He was stationed initially in Washington for three months, and then the Jacksonville naval air station, but was reassigned to San Diego on December 2, 1941 after over 300 hours of flying time. After the attack on Pearl Harbor, Bonn saw combat in the South Pacific. On March 29, 1943, Bonn sent a letter to his parents stating he was going on patrol duty to "kill Japs." He never returned from that patrol, and on morning of April 10, Bonn's parents were notified by the Naval Department that Lieutenant Bonn was Missing In Action. His official date of death is listed by the Naval Department as April 7, 1943.

Posted by Peach Basket Society at 10:28 AM

Email ThisBlogThis!Share to TwitterShare to FacebookShare to Pinterest
Labels: 1937-38, 1938-39, Pittsburgh Pirates, under 50