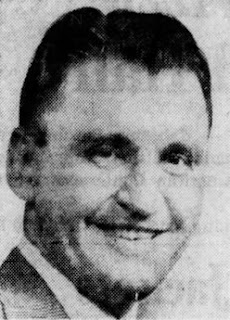 
Born in Chicago, Charles went to Scherz High School and was a highly-touted baseball player as well as a basketball player. He went to the University of Illinois on an athletic scholarship, but due to the Depression, he signed on to play professional baseball to help the family finances. He played briefly for Louisville in AA ball. A few years later, he signed on to play on the legendary Babe Didricksons barnstorming team, which then got him into other semi-pro and professional teams around Chicago. An arm injury ended his professional baseball career, but he played semi-pro baseball, as well as playing professional basketball for Akron Goodyear. He stayed with Goodyear for many years as their athletic and activities director and also coached the company's entry in the National Industrial Basketball League.

He was married to Bea and had a son and a daughter.

Posted by Peach Basket Society at 10:19 AM