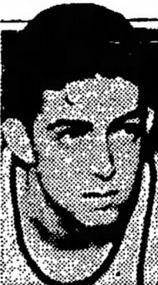 I only had a name: Ed Mullen. Nothing else to go on. No college, no birthdate, no hometown, nothing. So I just did a search of "Ed Mullen basketball Oshkosh" and was able to come up with old newspaper articles about a basketball player named Ed Mullen who played for Marquette and was from Fond du Lac. From there, I found his obituary, which included family information, date of death and age. From there, a search of the Social Security Death index yielded no Ed Mullen dying in 1988. However, a search of just "Mullen" with a specific date of death yielded a Joseph Mullen who died on January 10, 1988. So I started searching out Joseph Mullen and found that Ed Mullen the basketball player was actually named Joseph Edward Mullen. His widows obituary listed her husband as "J. Edward Mullen" from Oshkosh. The pieces all fit. Was able to find a birthdate, and the mystery of Ed Mullen, Oshkosh All-Stars, is solved.
Birth name: Joseph Edward Mullen
From Fond du Lac, Wisconsin
Played guard at Marquette from 1932-34, and was named All-American in 1934.
Later became an attorney and lived in Washington, DC. In 1969, he moved to San Francisco to work for the VA.
He died of an aneurysm in San Francisco in January of 1988.
He had a wife, Goldye Brossell (1913-2009), two children and two step-daughters, Judith Fein and Temmy Mahoney.