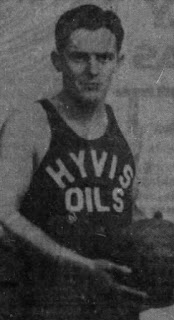 Gerald Archibald was born in 1907 in Charlottetown on Prince Edward Island. Archibald was the owner/GM/coach as well as a player. A member of the Midwest Basketball Conference, Warren joined the NBL despite losing its sponsorship with Hyvis Oil. Archibald secured a sponsorship from White Horse Motors in Cleveland and moved in part-way into the 1939-39 season. Archibald then moved the franchise to Detroit and sold the team in late 1940. Archibald was the son of Lyman Archibald, a member of James Naismith's first basketball team in Springfield, Massachusetts, in 1891. Lyman was the founder of the Archibald Fox Ranch in Warren in 1915, a business that Gerald and his wife Elizabeth ("Betty") took over and became even more prosperous. Gerald and Betty had two children.

Posted by Peach Basket Society at 8:21 AM