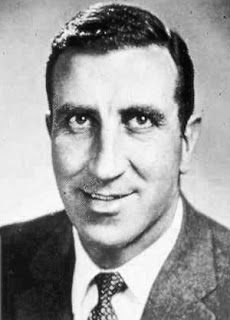 Urgel was born to Peter Winternute and Iva Omat in 1917. He played on the Oregon NCAA Championship team in 1939 before going to play professionally in Detroit for one season and later returned to the Pacific Northwest. He served as player-coach for the Portland entry of the Pacific Coast League and worked for Boeing for many years.
He was last seen on October 19, 1977.  His friend, Jerry Caldwell, claims to have woken up aboard Wintermute's yacht and Urgel was nowhere to be seen. Caldwell reported him missing to the authorities. The lake was dragged, but no body was ever found.
He was married to Ruth Kilkenny (1921-1977) and the couple had 2 children.

Stats:
http://www.basketball-reference.com/nbl/players/w/winteur01n.html
http://www.justsportsstats.com/basketballstatsindex.php?player_id=wintesl01
Posted by Peach Basket Society at 7:47 AM