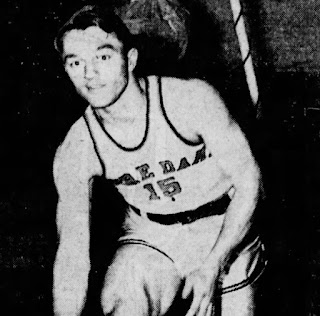 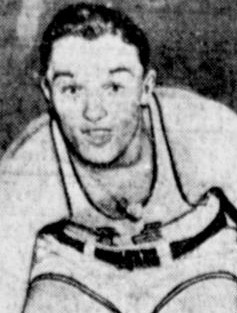 What made this more confusing is the other basketball player named Ed Sadowski who played in the NBL as couple years later, and the the BAA. There is also another Ed Sadowski who, of all things, went to Notre Dame in the mid 40's (and was from Marquette). So how to start to pick this out?
First step was checking Notre Dame records. In an issue of the school's Scholastic magazine, I find that he played in Madison Square Garden against Colgate, in front of family and friends who came down from his hometown in Westfield, Mass., to watch. Hometown. This gets us to the census records.
Found this record:

I found the Notre Dame Commencement program from 1939, which gives us his full name: Edward Marion Sadowski, from Westfield, MA, graduating with a BS in Chemical Engineering. This matches with one of the previously-suspected Ed Sadowski possibilities (I have removed the suspects who were excluded.)

He also played football for Notre Dame in 1936.

Stats:
http://www.basketball-reference.com/nbl/players/s/sadowed01n.html
http://www.justsportsstats.com/basketballstatsindex.php?player_id=sadowed02
Posted by Peach Basket Society at 11:59 AM