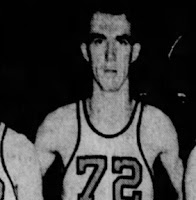 
A photo of the Frankfort High School team of 1938-39 shows Johnson. Therefore he would have gone to Purdue after 1939.

Born to Lawrence and Pearl Johnson, he went to Frankfort High School and served in the Army during World War 2.

In January of 1939, during a game against Kokomo, Splinter got into a fistfight with Jim Ricketts that escalated quickly as fans poured onto the court, resulting in a punch to the jaw for the referee. Police had to break up the near-riot.


He was married to Julie and had a son and a daughter. 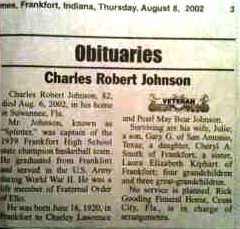 Stats:
http://www.basketball-reference.com/nbl/players/j/johnsch01n.html
http://www.justsportsstats.com/basketballstatsindex.php?player_id=johnssp01
Posted by Peach Basket Society at 8:24 AM