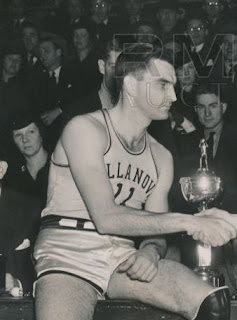 I saw an article that mentions his hometown was Cleveland, Ohio. That clue, along with a photo on ancestry.com that looked like the photo here, and his daughter who was born in Akron, allowed this all to come together.

Born to Earl and Grace Montgomery, Jim starred at Villanova before heading to Akron, where he played many years while employed with Goodyear. He later became a VP at Reynolds He died in 1982.

He married Wilma Morgan (1914-1979) and they had three daughters, Marilyn, Sue and Barbara.


Posted by Peach Basket Society at 4:00 AM