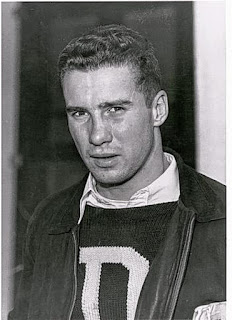 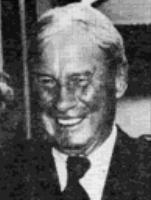 MacLeod was a star halfback at Dartmouth and is a member of the College Football Hall of Fame, finishing fourth in the Heisman Trophy voting in 1938. He played nine games for the Chicago Bears in the NFL in 1939, as well as playing basketball for the Bruins that winter. He joined the Marines and served as a fighter pilot in World War 2. After the war, he started working for Liberty magazine and later moved to Hearst wher he was a vice president and director of advertising. In 1961, he was hired as publisher for Seventeen magazine. Two years later, in 1963, he became the marketing head for Subscription Television, a forerunner to the cable TV industry.

He married Louise Jardine  and the couple had a daughter, Merrill Stenbeck, and three sons; Robert, Edward and Ian.

Stats:
http://www.basketball-reference.com/nbl/players/m/maclero01n.html
http://www.justsportsstats.com/basketballstatsindex.php?player_id=maclebo01
Posted by Peach Basket Society at 4:23 AM