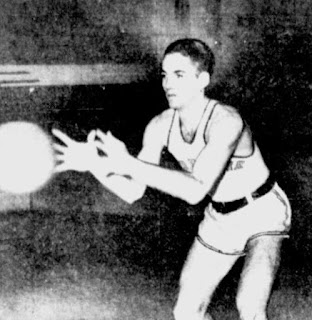 Born to Lawrence and Lucille DuCharme in Illinois, he headed to Akron to start a career at Firestone as a labor relations manager, playing basketball for a season as well. He served in the U.S. Navy during World War 2.
Paul married Katharine Graham in 1944, and remarried to Florence in 1950. He had two sons, Paul and Dennis, and two daughters, Diane Galbraith and Anne DuCharme.

Stats:
http://www.basketball-reference.com/nbl/players/d/duchapa01n.html
http://www.justsportsstats.com/basketballstatsindex.php?player_id=duchapa01
Posted by Peach Basket Society at 8:19 AM