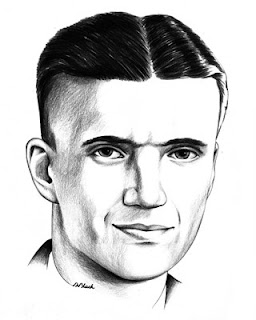 How many Art Andersons are there? Lots. Where to begin? Augustana College.
Augustana Hall of Fame
Here we get his middle initial. I then searched and found this obituary
http://www.legacy.com/obituaries/azcentral/obituary.aspx?n=Donald-Torrell-Anderson&pid=152817690
Looks like Art's son. Geographically matches, went to same school as his dad, gives us his mother's name, too.
http://www.augustana.edu/x36476.xml
This takes to findagrave, where we found both Mr and Mrs. Anderson's grave. Bingo. Another player identified.
Grave

Born in Chicago in 1916, Art's father Carl (1887-1918) died when Art was two years old. Raised by his mother, Lillian Peterson (1892-1977), Art became a basketball star at small Augustana College, where he graduated with the school record for point scored. He moved to Ohio and worked for Goodyear, playing basketball there for two seasons.
He married Elanor Bergendahl (1920-2005) on December 26, 1942 and they had two sons, Donald (1944-2011) and Kurt. He served in the military during World War 2.


Stats:
http://www.basketball-reference.com/nbl/players/a/anderar01n.html
http://www.justsportsstats.com/basketballstatsindex.php?player_id=anderar01
Posted by Peach Basket Society at 7:43 AM