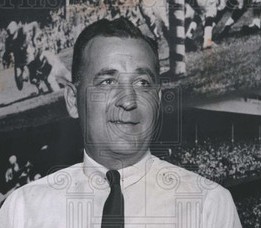 From Chicago, Illinois, Wilson was a football star at Northwestern who played 10 seasons in the NFL. He also put in a little time playing basketball at Northwestern. As a football player, he won four NFL championships in his time with the Chicago Bears, and went on to be the head coach for 12 seasons for both the Detroit Lions and Miami Dolphins. He was replaced in Miami by Don Shula.
His son, George Jr, played one season for the Dolphins

Stats:
http://www.basketball-reference.com/nbl/players/w/wilsoge01n.html
http://www.justsportsstats.com/basketballstatsindex.php?player_id=wilsoge02
Posted by Peach Basket Society at 7:00 AM