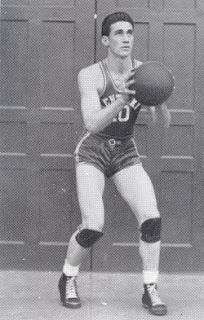 Thompson was born in Jeffersonville, Indiana, to Homer and Anna Thompson, where he went to high school and played basketball and baseball. After playing basketball at Kentucky (where he also boxed), he joined Indianapolis in the NBL. He served in World War 2 as a Marine and returned to professional basketball after the war. He went to teach at Jeffersonville High School before moving to Fort Lauderdale in 1958 where he worked with the Broward County Board of Health. He returned to Indiana in 2003, where he died in 2007 at 91.
He married Valma Drury on May 14, 1948 according to Indiana marriage records. According to his obituary, he was married to Virginia Northam for 42 years.

Stats:
http://www.basketball-reference.com/nbl/players/t/thompho01n.html
http://www.justsportsstats.com/basketballstatsindex.php?player_id=thompho01
Posted by Peach Basket Society at 5:45 AM