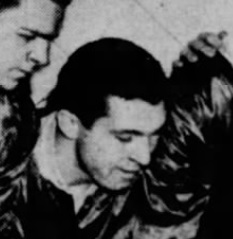 Originally listed as Art Bowman, a Hammond team photo I found listed him as "Wink" Bowman. Using the name Wink, I quickly found Wendell C. "Wink" Bowman from Monticello, IN. His obituary said he went to St Joseph's (like the newspaper article about the basketball player named "Wink") and his obituary in the Rensselaer Republican said he played professional basketball. Another mystery player identified.

Upon returning to the States, he graduated from Terre Haute Watchmaking School and operated Bowman's Jewelry in Remington for 26 years, and then worked for the Indiana State Highway Department.

Stats:
http://www.basketball-reference.com/nbl/players/b/bowmaar01n.html
http://www.justsportsstats.com/basketballstatsindex.php?player_id=bowmaar01
Posted by Peach Basket Society at 7:46 AM