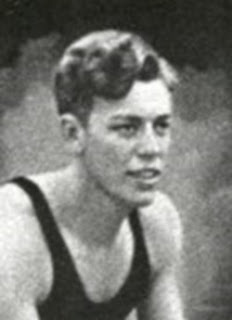 Served in the military in World War 2. (Played basketball while stationed in Norfolk, 1942)

Here is an article about him from the Detroit Free Press, December 3, 1940: 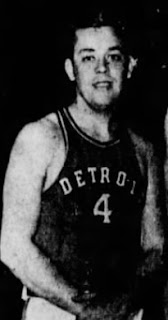 Although Jim Brown's present concern is with the Detroit Eagles of the National Basketball League, he is by no means at a loss for employment when the cage season ends. He spends his spring and summer playing professional baseball, and last year he was offered a Job to sing with a dance orchestra. This man of many talents has come a long way since he captained the Temple University basketball team during the 1934-35 season and was the leading scorer in the Eastern Intercollegiate Conference. His scoring ability carried him to the top of the American Basketball League. He played with Kingston, Wilkes-Barre and Troy in that circuit before joining the independent New York Celtics last season. When Dutch Dehnert, the Celtic coach, was hired by the Eagles this fall, he brought along Brown and Rusty Saunders from the New York quintet. Plays Despite Injury 'Jim suffered an infected foot two weeks ago, and it was feared that he would not be able to play In the Eagles' exhibition game against the Harlem Globe Trotters. He was released from St. Joseph Mercy Hospital the. afternoon before the game, and he insisted that he was fully able to play. The fans who saw the Eagles lose to the Globe Trotters may remember that although Jim was in the game only three minutes he scored two baskets and played a very fast brand of basketball. Unfortunately, he aggravated his injury and was ordered back to the hospital. His second term in the hospital ended last Friday, and he declares that he is ready for the Eagles' opening game Wednesday night against - the Akron Fire-stones, Ability Is Recognized Jim's crooning talent has long been recognized by his friends, but it was not until last winter that he received an opportunity to cash in on his warbling. While the Celtics were playing in Shreveport. La., Brown was offered a crooning job with Dusty Rhodes and his dance band, but. he decided to keep his vocalizing on an amateur basis. According to the other members' of the Eagles, Jim's locker-room specialties are "South of the Border" and "Oh, Johnny." His talent on the diamond has had more opportunity for expression, however, as he has successfully combined professional basketball and baseball. He made a name for himself in the Class D minor leagues as a hard-hitting outfielder, and in 1938 was signed by the Tigers while playing at Hot Springs. Ark. In 1939 he was sent to the Tigers' Texas League farm at Beaumont, and this year he played with Toledo in the American Association. His work for the Mud Hens was confined to pinch-hitting because of an elbow injury he suffered early in the season, but he is expected to be in the Toledo outfield for the 1941 season.

Born to James and Mary (Singley) Thomas. Thomas was a professional baseball player as well as a basketball player. He served in the U.S. Navy during World War 2.

Stats:
http://www.basketball-reference.com/nbl/players/b/brownji01n.html
http://www.justsportsstats.com/basketballstatsindex.php?player_id=brownji02
Posted by Peach Basket Society at 7:46 AM