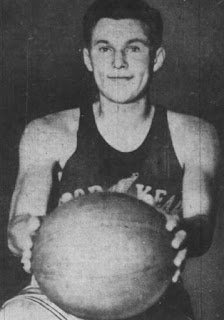 Vocke was tricky to locate because he went by his middle name. I fortunately stumbled across a census record from Akron from 1940 that listed him with other Akron players rooming in the same house, and it listed his actual name, "George." That allowed me all I needed to fill in the rest.

Found Howard Vocke while searching for Bill Lloyd. Vocke played at St John's with Lloyd, and they lived together when they went to Akron to join up with former St John's teammate Gerald Bush.
https://familysearch.org/ark:/61903/1:1:KWG5-DBX

Born to George and Lillian Vocke in New York. He attended St John's and served in the US Navy during World War 2. He worked as an engineer at Goodyear for 41 years.
He married Eleanor Shannon (1919-2013) in 1941 and they had three sons; James (d. 1986), Thomas (1961-2007) and Michael, and three daughters; Ann DiPlacido, Barbara Keady-Shannon and Jane Dalton.


Stats:
http://www.basketball-reference.com/nbl/players/v/vockeho01n.html
http://www.justsportsstats.com/basketballstatsindex.php?player_id=vockeho01
Posted by Peach Basket Society at 6:45 AM