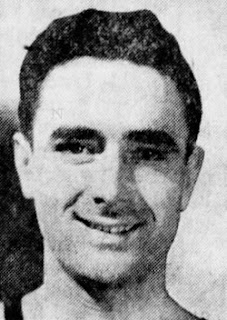 
Stephens was All-Conference in his senior year in Iowa, and then joined Goodyear as an employee as well as a basketball player. He served in the navy during World War 2, and then was the Goodyear Plant manager in Lincoln, Nebraska. He later transferred to the plant in St Mary's, Ohio, and was promoted to director of production  for their industrial products division.
While on vacation in the Virgin Islands in 1966 with his wife and son, Stephens suffered a fatal heart attack. He was 49 years old.
He was married to Jane and had one son, Michael.

Stats:
http://www.basketball-reference.com/nbl/players/s/stephbe01n.html
http://www.justsportsstats.com/basketballstatsindex.php?player_id=stephbe01
Posted by Peach Basket Society at 5:43 AM