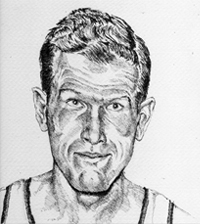 Rich lettered in basketball, baseball and soccer while at Cornell. After graduating, he took an engineer job at Seagam's, playing for their industrial professional team. In 1943, he began working at P&C Food Markets in Syracuse, and over the years the business flourished into a major chain, and Rich retired as president in 1974. In retirement, he owned or co-owned various golf courses.


Tommy married Helen Brew in 1939 and they had four daughters (Susan, Kathryn, Barbara and Nancy) and a son, Thomas.

Stats:
http://www.basketball-reference.com/nbl/players/r/richto01n.html
http://www.justsportsstats.com/basketballstatsindex.php?player_id=richto01
Posted by Peach Basket Society at 4:05 AM

Email ThisBlogThis!Share to TwitterShare to FacebookShare to Pinterest
Labels: 1945-46, over 90, Rochester Royals