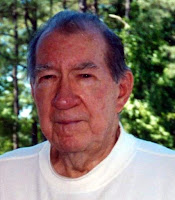 Born to Edward E. (1884-1969) and Mabel Wolfe (1886-1981) Moeller, Ed played basketball at Willis High School and later at Ohio State. During his senior year at OSU, the Japanese bombed Pearl Harbor and Moeller enlisted as soon as he graduated. After the war, he played pro basketball with the Tri-Cities Blackhawks and the Youngstown Bears in the NBL. He worked as a salesman and commercial artist before retiring and moving to North Carolina.