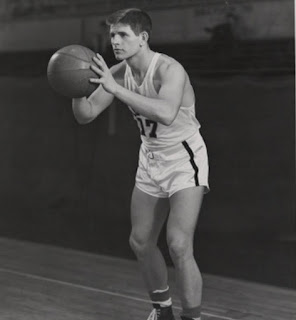 From Lafayette, Indiana, Biggs was one of ten children born to Guy and Ruby Biggs. He played one year of basketball at Purdue, as a sophomore in the 1942-43 season. He was also a all-American football player. He went into the Navy after the 1942-43 school year. He played for Sheboygan for in the playoffs of the 1846-47 NBL season, despite not playing during the regular season.  He eventually moved to Tuscaloosa, Alabama, and later Florida, where he did in 1990.

He married Sally Spindler on March 8, 1947, and later married Evelyn Pike. Not sure if he was divorced or widowed. He had two daughters, Debbie and Elaine.

His obituary says he played football professionally, but I see no record of this.

Stats:
http://www.basketball-reference.com/nbl/players/b/biggsma01n.html
http://www.justsportsstats.com/basketballstatsindex.php?player_id=biggsma01
Posted by Peach Basket Society at 8:22 AM