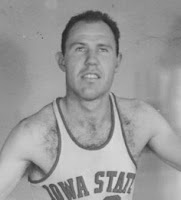 Price has born and raised in Texas. After college (where he lead the country in scoring), he enlisted in the Navy. Iowa State had a Naval program, and Naval cadets could train under ISU’s V-5 and V-12 engineering program and under these circumstances, Brookfield was permitted to compete in athletics despite having already used up his normal eligibility while at West Texas State. He also played minor league baseball. He spent 25 years as a coach and teacher in Indiana before retiring to North Carolina.

He was married to Marylou for nearly 60 years, and they had a daughter, Barbara, and two sons; Bill and John.