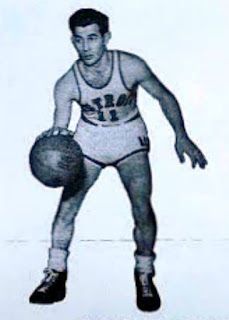 Many sources say he played at SIU, but he does not appear on their all-time roster.

Henderson played at Sparks Business College for three years (not sure which other two seasons he played), and later played semi-pro basketball around the Midwest before playing professionally for the Gems. He later became a businessman in Decatur and a member of the Board of Education in Effingham, Illinois.

Also would like to thank Jane Loy Ries at the Effingham County Courthouse in Effingham, Illinois, for helping me identify Mr. Henderson. She was in contact with Curt's widow, Melba, and was able to ascertain his identity for us and get us this great photo.

Stats:
http://www.basketball-reference.com/nbl/players/h/hendecu01n.html
http://www.justsportsstats.com/basketballstatsindex.php?player_id=hendecu01
Posted by Peach Basket Society at 9:47 AM