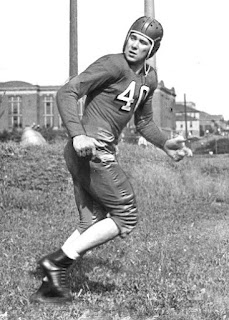 Born to Fred and Lucy Shaw in Richwood,Ohio, Shaw was a three sport star in High School, achieving success in basketball, football and track. He went on to play football for Paul Brown at OSU, continuing basketball and track there, also. He left school to serve in the U.S. Army for World War 2, and returned to not only play professional basketball, but played in the NFL, too, for four seasons. He wound up coaching football for many years in the NFL and CFL, and eventually back at the college level. He died in 2011 following a brief illness at 89 years of age.

Stats:
http://www.basketball-reference.com/nbl/players/s/shawro01n.html
http://www.justsportsstats.com/basketballstatsindex.php?player_id=shawbo01
Posted by Peach Basket Society at 11:16 AM