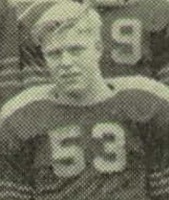 Some places say his name is spelled "Meyer" but Fordson yearbooks and some newspapers have it "Meyers."

A graduate of Fordson, Meyers served in the Coast Guard during World War 2, and after the war played pro and semi-pro basketball a few years, including a season with the Detroit Gems in the NBL. He would go on to be a police officer in Dearborn, Michigan, and later was that city's Civil Defense Director. In 1971, he moved to Florida in 1971, where he died in 2019 at the age of 96.

He married Jean McFadden in 1947 and they had two sons and two daughters.

Email ThisBlogThis!Share to TwitterShare to FacebookShare to Pinterest
Labels: 1946-47, Detroit Gems, over 90, PBLA