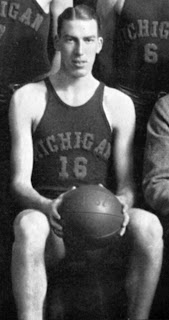 
Born in Syracuse to John and Ann Gee. He was a skilled baseball and basketball player in high school and college, and at 6'9, he was the tallest man to play major league baseball until Randy Johnson debuted with the Seattle Mariners. After graduating, he played minor league baseball in his hometown Syracuse before being purchased by the Pittsburgh Pirates in 1939. He wound up playing sparingly over 6 seasons in the Major Leagues, and finally embraced a career as a teacher and educator over baseball. He played professional basketball with Syracuse, but his job as a teacher prevented him from playing on the road.

He remained in upstate New York as a teacher, administrator and coach, dying in 1988.

He married Suzanne Corl on August 29, 1942, and they had two sons and three daughters.

Stats:
http://www.basketball-reference.com/nbl/players/g/geejo01n.html
http://www.justsportsstats.com/basketballstatsindex.php?player_id=geejo01
Posted by Peach Basket Society at 7:57 AM