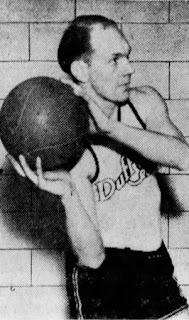 Only appeared in the playoffs for Whiting.
Allegedly attended Wisconsin, but cannot find him on Wisconsin rosters.

Was selected All-American at the AAU tournament in Kansas City in 1933. 6'1

Update 3/22/2017
While searching for Chicago Duffy Florals player Harry Lucas, I noticed he had played some semi-pro ball with a Willis Young. Since Lucas and Young were also teammates for the Florals in the MBC, I think we found that "Willie" is not "William" but "Willis". Looking through Chicago-area newspapers, I find repeated references to Willis who is apparently from Delphi, Indiana (which is near Lafayette). Some poking around genealogical websites and I find a family of Youngs from Delphi in the early 20th centurt with a Willis V. Young who was born in 1909 and died in 1981. All these pieces seem to fit.

Stats:
http://www.basketball-reference.com/nbl/players/y/youngwi01n.html
http://www.justsportsstats.com/basketballstatsindex.php?player_id=youngwi01
Posted by Peach Basket Society at 6:07 AM