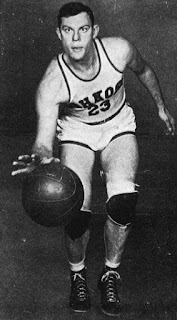 
Leroy Edwards was born in Crawfordsville, Indiana, in 1914. Known as the "East Side Terror" at Arsenal Technical High School, Edwards and his hook shot lead Arsenal to the Indianapolis City Championship in '31, '32 and '33. After graduating in 1933, he went to play college basketball at Kentucky, where he helped the freshman squad to an undefeated season. As a sophome, Edwards set the collegiate scoring record for a single season. He decided to leave school after his sophomore year, becoming the first player to forgo school to play professionally.
As the most recognized basketballer in the country, he signed with Indianapolis U.S. Tire in 1935 and joined Oshkosh in 1937. He played with Oshkosh through 1949, and was the first player in NBL history to score 30 point in a game (against Kankakee in 1938). His 3221 career points in the NBL are second highest in league history.
He married Audrey Ryan (1930-2011), who he met while playing in Oshkosh. They had a son (Daniel) and a daughter (Jodie). In 1953, Edwards started working with Chrysler as a transmission assembler at the Indianapolis plant, and would be employed there the rest of his life. One August evening in 1971, Edwards was mowing his lawn at his home in Lawrence, Indiana, and suffered a fatal heart attack. He was 57 years old.