Witasek was born in Lankin, North Dakota, to Adolph and Wilhelmia (Minnie) Witasek. He graduated from Lankin High School in 1931. A 1935 graduate of University of North Dakota, Witasek played five years in the NBL. He later served during World War 2, attaining the rank of Major while stationed primarily at Fort Wolters in Texas.  After the war, he operated a candy distributorship in Oshkosh. 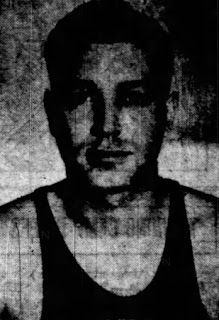 Stats:
http://www.basketball-reference.com/nbl/players/w/witashe01n.html
http://www.justsportsstats.com/basketballstatsindex.php?player_id=witashe01
Posted by Peach Basket Society at 4:42 AM

Email ThisBlogThis!Share to TwitterShare to FacebookShare to Pinterest
Labels: 1937-38, 1938-39, Oshkosh All-Stars, under 50