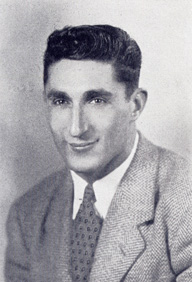 Scalissi served three years in the U.S. Army during World War 2, receiving a Purple Heart, Bronze Star and Silver Star while seeing combat in the European Theater. He played football and basketball at Ripon, as well as running track. Aside from playing for Oshkosh, he also played pro football for the Chicago Rockets. He later worked many years as a teacher and coach, and was a well-respected basketball official in Wisconsin high school athletics.

Stats:
http://www.basketball-reference.com/nbl/players/s/scalith01n.html
http://www.justsportsstats.com/basketballstatsindex.php?player_id=scalite01
Posted by Peach Basket Society at 8:21 AM