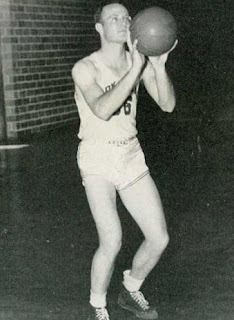 Born to Louis and Susie Richie, Ocie put in one year at NW Louisiana before entering the U.S. Navy
for World War 2. He was discharged and attended the University of Arkansas. He spent one season these before returning to his home town to go to NW Louisiana State. He signed with the Rochester Royals in September on 1947. He continued to play basketball while becoming a teacher for many years.

Stats:
http://www.basketball-reference.com/nbl/players/r/richioc01n.html
http://www.justsportsstats.com/basketballstatsindex.php?player_id=richioc01
Posted by Peach Basket Society at 8:20 AM