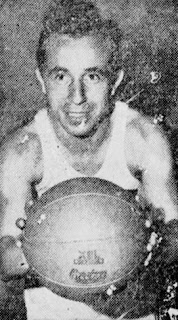 Goldsmith played in a Connecticut league in 1941, but in January of 1942, following the United States' war declarations, he entered the Coast Guard. Once out of the service, he attended LIU and then played professionally for one season with the Jeeps.
Goldsmith is one of the most notorious of players in basketball history. He was heavily involved in the point-shaving scandals that rocked college basketball in the late 40's and early 50's. He had his hand in a large portion of the 86 known fixed games that included schools like LIU, CCNY, NYU, Bradley and Kentucky. He was arrested in April 21, 1951, and after a year of not cooperating, he finally pleaded guilty in May of 1952 to bribery charges., and that July was sentenced to 2 1/2 to five years in prison.


Stats:
http://www.basketball-reference.com/nbl/players/g/goldsjo01n.html
http://www.justsportsstats.com/basketballstatsindex.php?player_id=goldsja01
Posted by Peach Basket Society at 4:35 AM