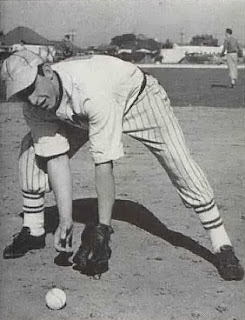 Born in San Jose to Abel and Mary Rodrigues, Rodrigues was a natural athlete, playing basketball and baseball in college and in the military. He attended Salinas Junior College (now known as Hartnell College) before entering the service. He allegedly went to USF once out of the military but he does not appear on their all-time roster, and I haven't found any evidence yet putting him at USF except for his obituary.

He enjoyed golf and fast-pitch softball, as well as coaching kids, and worked in the concrete and construction materials business in California.

Abel was married to Sandy in 1950, and they had a son, Brian, and a daughter, Sharon.

Stats:
http://www.basketball-reference.com/nbl/players/r/rodriab01n.html
http://www.justsportsstats.com/basketballstatsindex.php?player_id=bakerbo01
Posted by Peach Basket Society at 7:35 AM