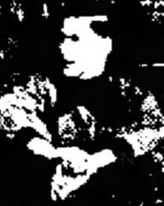 One of nine kids born to Henry Clay Rocker (1875-1963) and Sarah Emily Merriss (1882-1962), Rocker may have been the first American Indian to play in the NBL. His name appears on an Indian Census, listing him and his family as members of the Peoria tribe.

His time at Cal was interrupted by his service in the military.

(Sorry for the photo quality, but it was the only one I could find.)