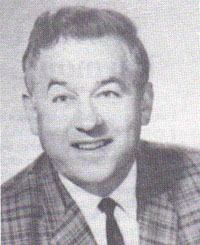 Born to John (1896-1948) and Anna (1898-1941) Sebastian. His collegiate career was interrupted by his service in the U.S. Navy. After, he played basketball professionally for many years, both in the NBL and with various touring and barnstorming teams. He quit playing to coach at Lakeview, and after a year there, he moved over Maine Township High School to teach (and maybe coach?).

At one time, he held a Guinness Record for hitting 63 consecutive free-throws while blindfolded.

Stats:
http://www.basketball-reference.com/nbl/players/s/sebasjo01n.html
http://www.justsportsstats.com/basketballstatsindex.php?player_id=sebasjo01
Posted by Peach Basket Society at 10:25 AM