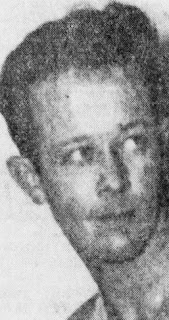 His family moved to Reno after Bob finished high school. His collegiate career was interrupted with service in the Army Air Corps, where as a pilot he saw action in the Philippines. He went back to school, and received offers to sign to play baseball with the Brooklyn Dodgers, but he turned it down to stay at school.
He was married to Carol and they moved to Kauai in Hawaii, where Bob operated a restaurant. A lot of their house had been destroyed in Hurrican Iniki in 1993. Bob died there in 1995 following a lengthy illness.

Stats:
http://www.basketball-reference.com/nbl/players/o/oshaubo01n.html
http://www.justsportsstats.com/basketballstatsindex.php?player_id=oshaubo01
Posted by Peach Basket Society at 11:25 AM