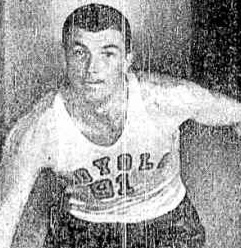 
Jack Dwan graduated from Senn High School, and went to Loyola where he played basketball and golf. His time in college was interrupted by World War 2, where he served in the U.S. Army Air Corps. After returning from the war, he finished college and played a couple seasons for the Lakers. He then worked for Raynor Door for many years, while continuing to golf and play softball. He died in 1993.

(His obituary says he went to Senn High School, unlike other biographical records that say he went to Loyola Academy high school)