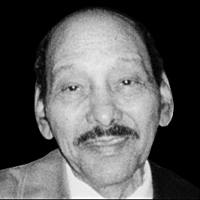 
His obituary say he was born in 1922, but the SSDI has 1921. He went to Scott HS in Toledo, and then moved on to the University of Michigan. He entered the navy for World War 2, where he was one of the first black ensigns. After the war, he returned to the Globetrotters. He retired from basketball in 1956, and later moved to Lubbock, and was eventually became a High Priest for the Church of Latter-Day Saints.
Tony was married three times. First marriage was to Chulla Hutchinson, and they had two chidren, Leonard and Marilyn. His second wife, Marlowe Ann Goins, died during the birth of their daughter, Antio. His third marriage was to Neville Sires, and they had two sons, Tyler and Terrance.


Stats:
http://www.basketball-reference.com/nbl/players/p/peytoch01n.html
http://www.justsportsstats.com/basketballstatsindex.php?player_id=peytoto01
Posted by Peach Basket Society at 7:55 AM