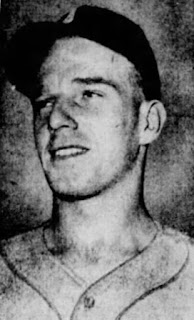 A lot of the problem of looking for him is the multitude of article on Johnny Orr, who coached at Michigan.

Orr was a pitcher who played for a few seasons in the Yankees and Cardinals farm systems.

Another article I found lists an Orr (maybe this one, maybe the other Orr) as playing with the Anderson Packers and an attendee of St. (unreadable) college.
Kokomo Tribune, Nov 21, 1946

He is in the St Rita's Hall of Fame
http://www.stritahs.com/hall-of-fame-1/?rq=orr

Concluded he is John R. Orr

Stats:
http://www.basketball-reference.com/nbl/players/o/orrjo01n.html
http://www.justsportsstats.com/basketballstatsindex.php?player_id=orrjo02
Posted by Peach Basket Society at 7:01 AM